Big Land Walks is a series of free walks. Our goal is not to convey any specific information but to have a collective poetic experience. Participants are members of the public who had no idea about us but saw us standing beside our sign on the street and decided to go on a walk. Here is a brief record of the walk.

I set up my 'Free Tour' sign at the south east edge of Nathan Phillips Square where it meets Queen Street. A group approached and asked about the tour. They were a group of people from Brampton going to the Blue Jays game later. I explained that this tour would be guided by chance. They agreed to come with me.

At the corner of Elizabeth and Edward Street, I picked up a small piece of garbage from the ground. I asked a participant to choose which part of the garbage would be the pointing end. Then I threw it into the air. It landed pointing most towards the north so we went that way to Elizabeth and Elm Street.

At the corner of Elizabeth and Elm Street, I asked a participant to ask a stranger on the street which way we should go. They asked someone who told us to go east, so we went to the corner of Elm Street and Barnaby Place.


This walk lasted about an hour. 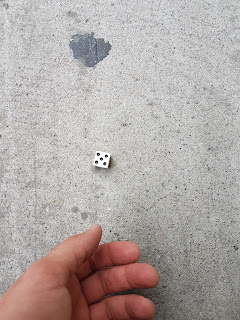