Hang the Bastards And let the bastards hang In the wheat fields City and country Nation and badge On your right hand The customer is always right handed I am in Wisconsin I am in a wheat field I am smoking wheat in the fields of the time of the war The Nation I am in the city The city of time Do you slaughter your horses where you ride Then I say, Ride on, Gallant of the knights, Gallant of the nights, Ride on, onward
--Eli Fox

Alek. Originally from Xinjiang, he now lives in a condo in Richmond Hill. Pictured here is the spot where he keeps potted plants and bikes he's collected to fix. 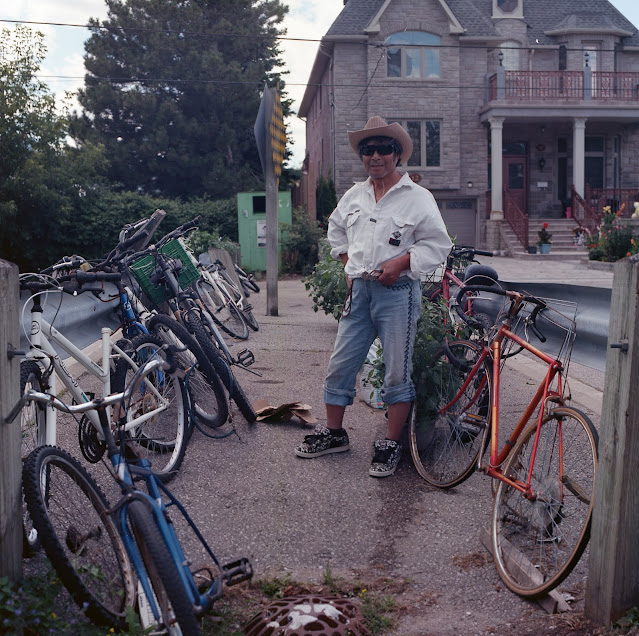 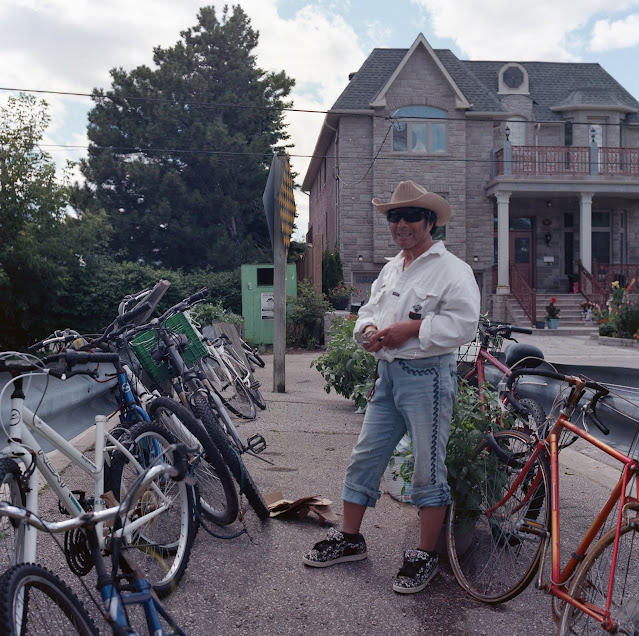 (Is capitalism going to take it's lithium today? And not in a coup)


Rebeccah Love’s new short film “Parlour Palm” follows the unravelling mental state of a main character with bipolar disorder (played by an electrifying Sarah Swire), who shares her domestic space with a concerned romantic partner (a part well played by Tyson Coady) who nevertheless has less and less time for her due to his own career and climbing the ladder at a law firm. Her condition worsens amid bleak environmental news and the pressure to have a child in an uncertain world.
As a portrait of a manic episode it's masterful, and draws an effective parallel to the human race equally off it's meds, speeding through the ‘yellow lights’ (to quote her partner’s short-hand phrase for her increased velocity towards collapse) of changing climates and burning rainforests. But while the red lights of the ambulance at the film’s climax hopefully signal some form of help is on the way for the hurt character here, what constitutes help for our human global situation is a question we each need to answer for ourselves. Though the film suggests one particularly novel and incredibly bold answer, 'the asshole song', a wild, vulgar refrain born from the depths of the character's manic episode, and a moment of such searing intensity and originality that it moves the film from being simply a well-delivered biographic portrait or relationship psychodrama to an unsparing excoriation meant to shatter the bourgeoisie self-righteous obliviousness of our colonial, capitalist, white supremacist society. In the full grip of a manic episode she sings to her status and career obsessed boyfriend, “you're an asshole (and I'm an asshole too).”
Her lover, while perhaps reasonably patient and kind, is indeed a member of the wealthy privileged ruling class who are most complicit in holding up the status quo that continues to produce a world in a permanent state of collapse for everyone kept away from their enclaves of comfort. And the medication (lithium, or the element Elon Musk thinks is worth coup-ing Bolivia over) that might save her life will also make her more demure and palatable to her technocratic boyfriend who is a stand-in for society as a whole. The fact that she doesn't want to have a child enter this rigidly codified and commodified order is unsurprising.

The implication of her climactic (and climatic) ‘asshole song’ is that the holders of power in our society need the asshole song sung at them - the people at law firms, museums, corporations, universities, most landlords, bosses and managers, anyone with power over others, and all those who have stood to gain prestige as their institutions have tacitly held up a system that preys on the non-white and the poor and ravages the planet. And more importantly, like a person in the midst of a manic breakdown, they also ironically need the necessary sense of destabilization and self-erasure to throw off false notions of impropriety and “good health” to be able to sing it about themselves - as a beginning mea culpa and renunciation of their power, to heal themselves, others and the planet. That our society is run by those uncomfortable in seeing themselves, their positions, and their institutions as assholes is the truth hidden behind our bureaucratic and techno capitalist order which pushes those with mental illness to the fringes while denying that these power structures themselves suffer from any mania or psychopathy.

And none of this is to posit that the mentally ill are rarefied canaries in the capitalist coal mine, or to suggest that ‘only the mentally ill can truly express what's happening'; that suggestion is not at play in the film. The precise emotional tenor of the asshole song in the film may be precipitated by bipolar disorder, but it is an individual's unique human and artistic expression of a truth in plain view of us all. We should all join the character in singing it - can’t we each accept that the way we are living is unjust? And shouldn’t we each be allowed to breakdown, to be allowed to scream with horror at the world and the human soul?

While she is singing this song she stages a pantomime and breaks the fourth wall, asking us in her imagined audience if we think the world is beautiful. The humiliation of the character’s collapse singing this refrain and asking this question is also her most proudly unsparing moment of truth telling and emotional power - and in the case of this film, artistic triumph - for despite the danger an incredible truth has been sung. We must answer it, and work to break down the way things are.
--David Stokes