In North York, on a street full of warehouses and vacant lots, there’s one lot crammed with cars. The cars don’t drive. They’re kept outside and collect rust and a few of them no longer have doors; their engines and batteries are missing.

I build them from scratch, said Bill, walking through the lot. Take them apart and put them back together. That’s what a car is, it’s just a bunch of pieces put together.

Also in the lot is a metal machine standing in the corner, half covered in a white plastic tarp billowing in the wind.

That thing? That’s a drill presser, says Bill. I’m holding it for a friend. Mind giving me a hand? He’s speaking to two young men, two trespassers he found shooting a film in his lot. They were rehearsing a scene when he found them. Oh, hello, sir, one of them said.

Bill hobbles to the drill press, carrying his weight, watching where he steps. I’m diabetic, he says. In the summer the heat was so bad the insulin didn’t work. I had ulcers on my legs and on my foot. They’re healed now, more or less.

With the young men’s assistance, Bill pulls the tarp over the drill press, and picks up bricks and other objects to hold the tarp down. It’s a cold, nippy day.

You can take that, he says. He’s referring to a light stand that one of the young men has picked up and is inspecting. The young man puts it down.

A shutter clicks. For a brief moment, Bill looks into the camera. He’s a large man, and wears a dusty, navy blue windbreaker that hugs his round belly. White wiry strands of hair form a bush on his chin; the hair sprouting from his balding head is wispy and sere.

If you need anything, I can give you my phone number, Bill tells one of the young men.

The young man pulls out his phone and Bill tells him his phone number. You can visit or call any time if you have a question, says Bill. They shake hands.

As the young men are leaving, Bill smiles and asks a question: Did you get what you wanted? The one holding the camera answers: Yeah. I think so.

The backdoor that leads into the warehouse reads Wright Engine Rebuilding. The name is scratched in, as by a metal key. Bill opens the door and steps out of the cold. Shelves that touch the ceiling line the walls, full of cardboard boxes and torn packages and paper coffee cups. A rolling hill of tied grocery store bags and materials takes up the room, ceding only a narrow passage to cut across.

Shutting the door behind him, Bill reenters his hidden, private room. 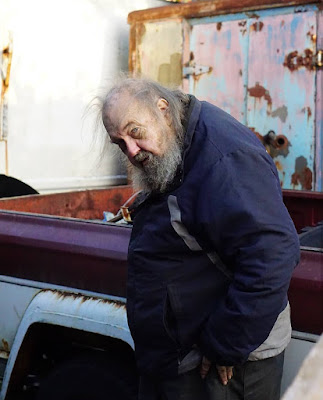